In Finland and some other European countries we have tradition in which doctoral candidate submits his or her thesis to be first examined by at least two external evaluators decided by the university in question. If the examiners approve the thesis then public examination – discussion follows some months later. Usually, this is formality but one out of 300 cases or so the thesis can also be rejected at the public hearing by the opponent. Last Friday October 21st I had pleasure of being public opponent for Mr. or should I now say Dr. Joel Järvinen. His doctoral thesis was titled “The Use of Digital Analytics for Measuring and Optimizing Digital Marketing Performance” so one could expect heavy and heated discussions on marketing performance and digital analytics and the show wasn’t a let down for the audience.

We managed to clarify basic concepts of digital marketing and even tough Dr. Järvinen did not use the concept of digital marketing that I proposed in the Journal of Digital Marketing I felt that he is on the right path. Besides, digital marketing concepts we also started with performance measurement problems in long term and short term. What is short and how long is long is up to you to decide. Also, we discussed what is being measured and why? and should we also include feedback loop i.e. overtime we learn to measure and realize that we measured wrong things and we should be able to reflect on that and learn from that to alter what is being measured.

Good example of this comes from former Soviet Union, at least this is how the story goes. A farmer back in the day of was using his tractor over the day to “perform agricultural activities” and when the day was nearly over he went to the boss and said “ I am ready”. Boss said that “No you are not, you still have some petrol left”. Then farmer realized  that boss measures petrol. Day after, when he was almost finished and the day was almost over he reluctantly pored the petrol to the ground, when the boss could not see. Then, he said to Boss “I am ready”. Boss said “Excellent work”.

So what and why we measure is important but more important in marketing is to start with something and later when you learn, you can alter and think what can be and should be measured. What is spent on digital advertising is important question?, why invest in Facebook advertising and pay a lot if nothing happens (nobody converts and buys your products). What other options do you have ? Google and content marketing etc.

Dr. Järvinen was had excellent knowledge of digital analytics (web, automation etc.) and also he had good command of marketing performance literature. I used my traditional question to unbalance him “What are your axiological assumptions?” It took him a while but he managed that as well =) Good luck and all the best for Dr. Järvinen in future research projects.

After public examination we had lunch and drinks at the restaurant/hotel Alba with lake scenery. Dr. Järvinen in the middle and the supervisor Professor Karjaluoto on the right, closest to the camera. 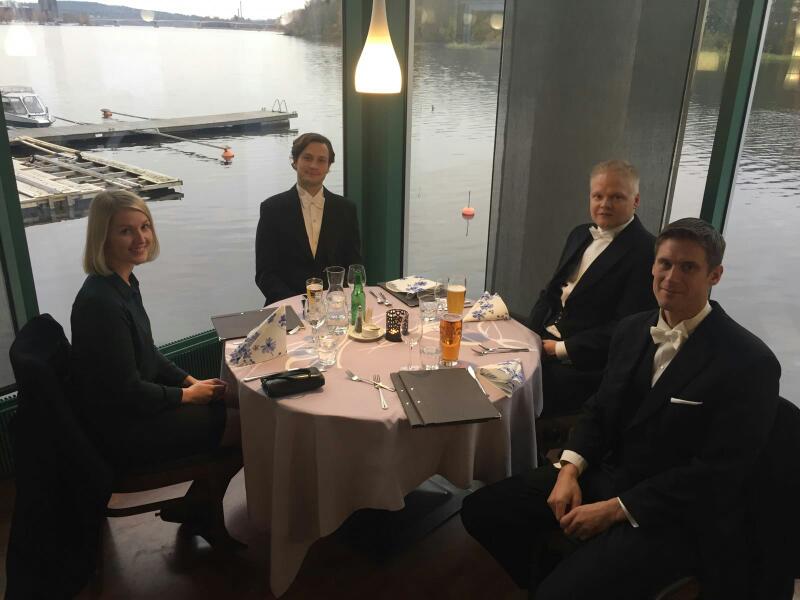